Luxor is game in the Luxor franchise. It is the first one in the series of tile-matching, action, puzzle video game developed by MumboJumbo. It was released in May 15, 2005, succeeded by either Luxor: Amun Rising or Luxor 2.

The colorful spheres forcefully moves forward by a pusher called Scarab to the pyramid. Always avoid the spheres from entering the pyramid by shooting the sphere to create matches of 3 or more in the same color. Making 3 matches in a row (either by performing Combos or creating Chain Reactions) will spawn 1 out of 8 Power-ups that you can catch to activate them. Finishing a whole group of spheres will spawn a gem that is worth of points after the scarab had been eliminated. Fill the progress bar by remove certain amount of spheres to finish the level.

If you failed to eliminate all of the spheres when they entered the Pyramid, you will lose one life and are forced to try the level again. After you failed the level, the message will read "FOUL!". If you lose all the lives you have, the game is over. When you match 5 or more spheres, there is a chance that an Ankh Coin will spawn from them. Collect 30 Ankh Coins to gain an extra life.

The map is located in Egypt. It consists of about thirteen destinations with their respective names. The whole journey starts from the left and ends to the right.

NOTE: Please be aware the from stages 1-12 has repetitive maps that occurred before the new one unlocked that is being the last, to finish the stage. Stage 13 has the maps that were the last since Stage 4.

Stage 3 - To The Pyramids (Caravan)

Stage 4 - Clue in the Ruins (Pyramids)

Stage 6 - Journey to the Sphinx (Oasis)

Stage 8 - After the High Priest (Karnak)

Stage 10 - Up the Cataracts (Necropolis)

Stage 12 - Temple of the Goddess (Hermit)

The whole game has been redesigned to high definition graphics. The graphics from Luxor 2 are used, including the sounds, but the music remains the same from its original game. 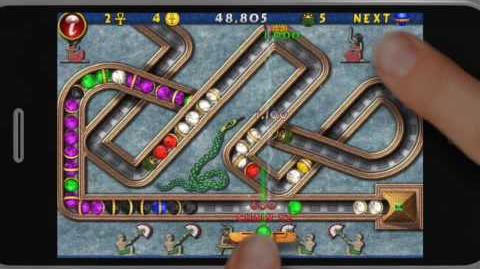